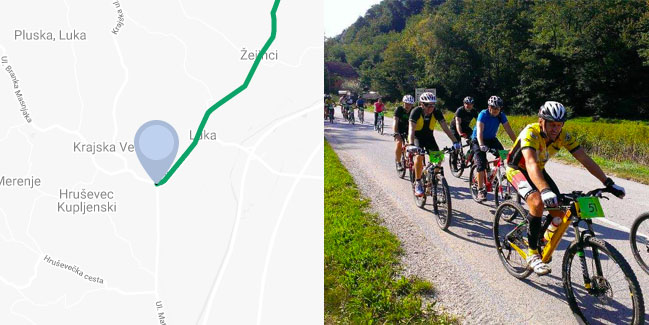 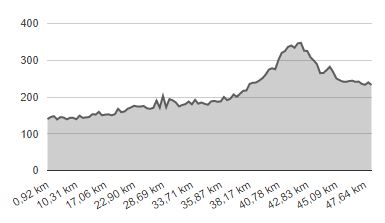 The main state route no. 6 is the most important cycling route in the Krapina-Zagorje County, leading from the Croatian Adriatic coast, in the vicinity of Rijeka, along the historical ‘Karolina’ road via Vrbovsko and Karlovac, all the way to Zagreb and onward via Krapina and Varaždin to the northernmost point of Croatia near Mursko Središće, with a natural continuation towards Budapest and Vienna. It was named the Zagorje route because it crosses the central part of the Hrvatsko Zagorje region in the section between Zagreb and Varaždin (direction south-north). The following description of the Zagorje route includes the section between Luka in the Zagreb County, where it intersects with the County route and extends further in the direction of Zagreb, and Bednja in the Varaždin County, where cyclists can make a turn for Varaždin and Trakošćan.

The route starts south of Luka 1 town centre at the intersection, with roads heading in the direction of Zaprešić, Kraljevac na Sutli and Zabok respectively, and continues along the relatively less busy and generally flat county road Ž-2195 due north. You’ll soon find yourself cycling through the centre of Luka, a village featuring the beautiful Church of Saint Roch, where the County route splits off towards the east, and after a 3.7 km ride from the start you’ll enter the Krapina-Zagorje County. After riding up and down a small incline you’ll reach the T-junction 2 where we just keep going straight ahead, all the while making sure to exercise due caution since motorists on the road to the right have the right of way. Here you will find the birthplace of Franjo Tuđman, the first president of Croatia. Continue through Veliko Trgovišće and, after crossing the overpass over the expressway towards Klanjec, you’ll reach the small town of Martinišće. In Martinišće, after the junction with the main road 3 to the right (with caution), make a right in the direction of Zabok at the T-junction.

After a 10.3 km ride from the start you’ll come across the roundabout 4, with the Gjalski Castle – Zabok’s most famous attraction – located to the left, as well as the popular restaurant ‘Grašo’. Make sure to bypass the very busy roundabout and turn left over the sidewalk, taking the old road towards Zabok. After riding for 2.5 km from the Gjalski Castle, where caution is needed due to a bit more intense traffic, make a right 5 and enter the Radničko Naselje street. After you cross the railroad tracks, immediately make a left 6 to reach the new town centre of Zabok, where you can relax and unwind in one of the many cafés and eateries. Continue straight and then turn left, once again crossing the railroad tracks, then make a right turn on the main road at the T-junction 7 (caution). After riding for 800 metres (14.3 km from the starting point), make a left at the T-junction 8 in the direction of Sveti Križ Začretje and keep going for about 5 km along the less busy county road Ž-2160. Having reached Sveti Križ Začretje, continue straight ahead and up a small incline, until you reach the T-junction 9. There you need to make a left turn and enter the picturesque town centre featuring the Church of the Holy Cross and the ‘Žitnica’ museum in the immediate vicinity. This is where the Zagorje route merges with the Toplice route, which crosses the county in a west-east direction.

From the town centre of Sveti Križ Začretje, at exactly 20 km from the starting point, the route shoots off to the right down a short slope. After 550 metres 10, you need to make a left turn, taking the local road over the railroad tracks (careful not to miss the turn), and after another kilometre, make a right at the Y-junction 11. Keep cycling through the picturesque valley of the Pačetina brook and at the 25 km point from the start, at the T-junction 12, turn right towards Krapina along the main road. After 1.3 km, make a left 13, and after another 1,700 metres 14, make a right turn onto the local trail in the direction of Pristava. This is followed by a short uphill climb that leads to a lookout with a view of the town of Krapina and then a descent that ends after the underpass under the Zagreb – Krapina highway. Here you need to make a left turn at the intersection 15, after which the route continues left and immediately right, up a short incline. You’ll soon reach the village of Bobovje. There you have to connect 16 onto County road on your left side and continue down a slight downhill slope until you reach Krapina, the seat of the county.

At the T-junction 17, 32 km from the starting point, take a left turn as soon as you cross the railroad tracks. Make a right turn after 50 m, and keep going for 100 metres, until you reach a bridge crossing the river Krapinica 18. From there, a beautiful 750-metre mixed pedestrian-bicycle path leads left, to the town centre. When you reach the end of the path, carefully cross the Ante Starčević street 19 and continue along Hrvatski Narodni Preporod Boulevard all the way to Ljudevit Gaj Square. There you can bask in the beauty of the urban centre of Krapina and enjoy some refreshments served by the numerous nearby cafés and restaurants. At the square, make a left turn 20, but take care because this is a one-way street (if you’re coming from the opposite direction, you have to dismount from your bicycle and push it for a 100 metres on the sidewalk). When you have reached Celjska Cesta, make a right turn after the bridge over Krapinica 21. What’s next is 300 metres of cycling on a very busy road, with the option of using the sidewalk. Here, 34 km from the starting point, you will come across the most famous attraction in the County, the Krapina Neanderthal Museum. From the parking lot next to the Museum to the exit from Krapina, the route turns right 22 onto the mixed cycling-pedestrian trail along Krapinica and, after 800 metres, opens to the Matija Gubec Street. There you need to make a right turn and then immediately left 23, under the overpass on the state road D1 Krapina – Maribor.

The northernmost part of the Zagorje route in Krapina-Zagorje County follows the local road to Strahinje, where you should make a left turn 24 after 200 metres, past the FC ‘Zagorec’ stadium, and then another left, after 900 metres, at the T-junction 25. The route then once again leads under the D1 state road overpass. After passing the overpass, turn right 26, along the fence of the former ‘Krateks’ textile factory. After 600 metres you’ll reach the T-junction 27, where you need to turn right onto the county road Ž-2099 in the direction of Jasenje. The route ends with a 12-km ride along this picturesque and not overly busy road, which includes cycling for 6 km up a relatively mild slope (150 m difference in altitude), followed by a somewhat sharper 3 km descent, to the border of Varaždin County. The route’s highest point – at an altitude of 354 m, 42 km from the starting point – is located in the municipal seat of Gornje Jesenje, followed by a downhill descent to the village of Šaša. At the T-junction 28 which is located here, you need to turn right and then keep riding for another 3 km to reach the intersection with the county road Ž-2258 in the vicinity of the municipal seat of Bednja 29, which is known for its unique vernacular. Even though the route ends here, you can keep going along the Zagorje route to the right, in the direction of Varaždin or make a left turn to reach Trakošćan.