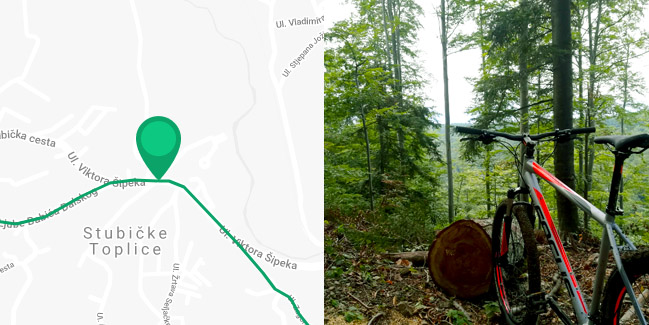 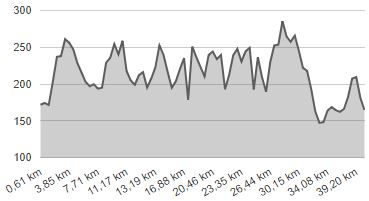 The ‘Gubec Country’ Route is the only longer route laid out by local County tourist boards. The longer variation is 42 km long, down to 34 km in the shorter variation. The circle-shaped route connects the towns of Oroslavje and Donja Stubica and the municipalities of Stubičke Toplice and Gornja Stubica in the ‘Gubec Country’ of Stubica. If we take the most famous tourist destination Stubičke Toplice as the starting point, after cycling for 400 meters on the busy state road D-307, the route turns right along Zagorske Brigade Street towards Pustodol, and then once again right towards the south along quiet local paved roads. After riding uphill for 2.5 km to Donja Podgora, the route turns downhill to the left and just before arriving in Donja Stubica it turns right to the east along a short gravel road over a stream and then again right to Gornja Podgora.

From there, the route extends first to the north and then to the east, with several shorter uphill and downhill sections, via Milekovo Selo and Hižakovec to Brezje, at 270 metres above sea level, after which it descends towards Gornja Stubica 70 metres further down. The route passes by the famous Gubec Linden Tree and the church of St. George, to the centre of the municipality of Gornja Stubica, and then turns north on a local road along the stream Burnjak to Orehova Gorica. Here you should make a sharp turn uphill to the left to the Peasants’ Revolt Museum and the monument to Matija Gubec, from where there is an unforgettable view of the entire Stubica region. After that, the route descends again to the west, onto the state road D-307. There it turns right and, after 100 metres, it breaks off and turns left onto the local road to Modrovec.

For those who want to ride along the longer variant of the ‘Gubec Country’ Route, instead of towards Modrovec, the road extends 2 km uphill on the road D-307 to Banščica, with much needed caution due to slightly higher traffic. In Banščica, the route turns right a little further uphill along a beautiful and quiet local road to Pasanska Gorica before it turns right down the hill, towards the picturesque valley of the Burnjak stream. After a 3 km ride from Banščica, you will reach Orehova Gorica again, where you can return to the main route via the monument to Matija Gubec. In order to avoid riding uphill to the Monument twice, we recommend that upon arrival in Gornja Stubica, instead of the Route through Orehova Gorica, you ride directly to Samci. So you can visit the Monument on your way back from the direction of Pasanska Gorica.

The next section of the Route towards Modrovac leads uphill for 1.5 km, after which the Route turns left and leads to the west through a picturesque hilly landscape with a view of the Stubica Valley in the south. A 600-metre-long stretch of the route runs along a relatively good gravel road, followed by a slight descent of 1 km to the south upon returning to the paved road. The route then turns west again via Vinterovec, which includes riding uphill for 300 metres on a good gravel road, but also a 100-metre-long downhill section of rough dirt road. After getting back on the paved road, the route continues uphill to the west along the slopes of the hills north of the railroad to Gornja Stubica, 900 metres on the paved road and 800 metres on the gravel road to Matenci. Here, the route crosses the Donja Stubica – Bedekovčina County Road, followed by 5 km of a particularly picturesque segment of the Route, which first climbs to a height of 285 metres, only to gradually descend to the lowest point of 147 metres above sea level near Andraševec.

This is followed by a 1.5 km ride on a flat and slightly busier county road through the town of Oroslavje, known for its beautiful castle and park, and then a 1.2 km ride on the even busier state road D-307 to Mokrice (be careful!). However, the Route then turns left onto a quiet local road; a 2.5 km ride up a slight hill brings you to Krušljevo Selo. Here you turn left again onto the main road, followed by the last part of the ‘Gubec Country’ Route, a 3 km long section on the very busy County Road Stubička Slatina – Stubičke Toplice, after which you return to its starting point in Stubičke Toplice.

Over the Slopes of Ivanščica