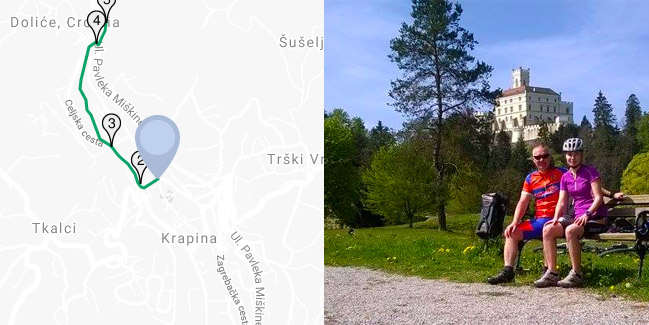 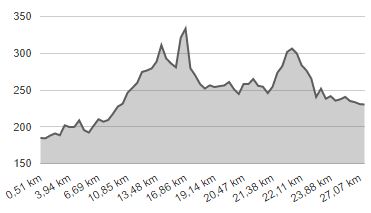 In addition to the Zagorje, Toplice, and Sutla routes, another cycling route of great national importance is the one leading from Krapina via Macelj and Trakošćan to Bednja. Apart from being the easiest bicycle connection from Zagreb and Krapina to the most famous Croatian castle in Trakošćan, it is also important as an alternative to the state main Zagorje Route. More specifically, the connection between Krapina and Bednja via Trakošćan is slightly longer than the Zagorje route, but it is a more comfortable ride, featuring gentler slopes and quiet woodland areas. The ‘Trakošćan’ Route is also important because of the connection to Ptuj in neighbouring Slovenia – for cyclists from the European Union, currently only via the small border crossing point of Cvetlin near Trakošćan, and after the Schengen regime has been introduced, also via the border crossing point of Macelj where cyclists are currently not allowed to cross.
The route starts in Krapina, the seat of the County, on Ljudevit Gaj Square 1 and it overlaps with the Zagorje Route for the first three kilometres. So, you should head west and after crossing the bridge over Krapinica and arriving at Celjska Cesta 2, turn right. After 300 metres of cycling on a slightly busier road, you’ll arrive at the parking lot next to the Museum of Krapina Neanderthals, where you should turn right 3 onto the hiking and cycling trail along Krapinica. After 800 metres, you’ll find yourself on Matija Gubec Street, where you need to turn right and then immediately left 4 below the overpass. Follow the local road to Strahinje and – after 200 metres – turn left 5, past the FC ‘Zagorec’ stadium. After 900 metres, at the T-junction 6, make another left turn. The route continues again under the overpass, after which you need to turn right 7, along the fence of the former ‘Krateks’ textile factory. After 600 metres, you’ll reach the T-junction 8 in Žitnica, where you leave the state Zagorje Route; while it breaks off to the right, you should turn left.
Soon after, you’ll cross the railroad tracks, then turn right at the T-junction 9 onto the slightly busier state road D-74 (caution). After 2.3 km you’ll find yourself in the village of Đurmanec, where the state Sutla Route merges and ends from the left at the roundabout 10. Continue north on the pleasant and low-traffic local road and – after 2.5 km – turn right onto the state road D-1 (caution) at the first intersection 11. Ride for 700 metres along the state road, then turn right again 12 onto the local road. After passing through the underpass under the Zagreb – Maribor highway, you’ll reach the intersection 13, where – considering that you’ll be crossing the D-1 road – you should carefully turn right and immediately afterwards take a left turn, onto a less busy road. Continue for 2.5 km to the north and then turn 14 right onto a short gravel road. The next section involves cycling for about 700 metres on the D-1 road, after which you should turn right at the intersection before the Trakošćan junction 15. Ride for another 300 metres along the connecting road from the Trakošćan junction and – having travelled 15.3 km from the start – you’ll reach the intersection 16 near the Macelj border crossing, where you need to turn right onto the county road Ž-2258 in the direction of Trakošćan.

After 400 metres you’ll enter Varaždin County, and after riding for another 4.7 km with two short inclines, you will reach Lake Trakošćan. Here you can continue to the main road 17, to the castle Trakošćan, but if you have a mountain bike and do not mind riding on a dirt road, you can turn right over a wooden bridge and reach the castle via a picturesque path along the southern shores of the lake. No matter which side you come from, the lake and the castle are an ideal place for rest and relaxation, and if you haven’t been there before, be sure to visit the museum in the castle. Continue east from the intersection with the main road 18 in Trakošćan, and after exactly 5 km you will reach the village of Bednja, the last stop on the route, ending at 28 km from the starting point, i.e. joining with the Zagorje Route.